The Future is Optimistic: Insights from Wattpad’s Youth Panel

Wattpad is home to a community of 80 million mostly Gen Z and Millennials. In order to better understand the most influential generation, we enlisted a voluntary panel of 1,600 of the most engaged members of our community to talk about what matters most to them. We call this youth panel Generation Wattpad. The results of our first Generation Wattpad survey tell a story of hope and pragmatic optimism. Gen Z cares about social causes—and they’re taking action to create the world they want.  They expect the brands they trust to feel the same—so if you want to tap into this diverse, socially active cohort, it’s time to rethink your position on the sidelines and take a stand.

Why do they want brands to give back? Because they’re doing it, too

More than half of our youth panel told us they’re doing active volunteer work in their communities. The youngest respondents in the group tended to do the highest amount of active volunteering, and older respondents tended to evolve their mode of giving-back to donations to charity—of which 35% say they do yearly. At every level it’s clear today’s youth think that giving back is about the right balance of resources and actions—so why would they trust brands who don’t follow suit? 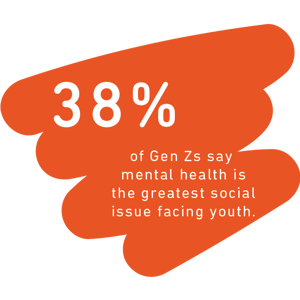 What's on their mind? Mental health

When it comes to getting involved in social issues, finding one that aligns with your core audience is important. So here’s some food for thought: of all the social issues facing youth today, 35% of our youth panel respondents said mental health was the most urgent. This was even higher for the younger respondents (aged 13-17), at 38%, who were also twice as likely as the older age group (aged 18-34) to report bullying as the most pressing social issue. What other issues did they talk about? 17% said racism and 13% said politics was top of mind.

They want brands to take a stand 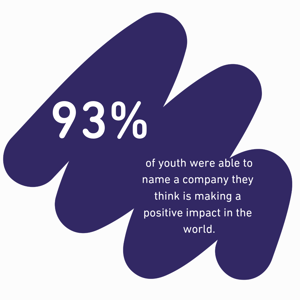 If you’ve been reading our recent articles, it will come as no surprise that socially-conscious brands are making a real-world impact. Gen Z and Millennials are noticing. 93% of all respondents were able to name a company they think is making a positive impact on the world. Perhaps surprisingly, they were most likely to name a for-profit brand than say, a non-profit or charitable organization. And, when we asked how they felt when brands take a stand, 91% agreed or strongly agreed that “I like when a brand stands up for a cause, even if it is polarizing”.  89% said they’re likely or very likely to pay more to buy from a company that has a clear/strong brand purpose.

Brands that were named when we asked our youth panel who's making a positive impact include Patagonia, Dove, Dawn, Lush, Amazon, Walmart, Tesla and Nike

Almost 12% of all responses named Nike as a brand making a positive impact in the world.  Nike's recent ad campaign with Colin Kaepernick was launched around the time of the survey, and it’s possible this ad impacted results. But one thing is clear—youth aren’t afraid of brands who get controversial.