Kaepernick: A Case Study in How Supporting the Underrepresented Makes an Impact

In September 2018, the public spotlight shone on Colin Kaepernick once again when Nike made him the face of their 30th anniversary campaign, reigniting the same controversy from two years earlier — with a vengeance. 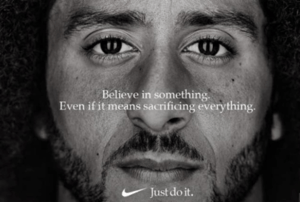 The extremely culturally-significant campaign almost didn’t happen as Nike’s executives feared they would anger the NFL, a Nike partner since 2012. Nike’s relationship with Kaepernick actually predates theirs with the NFL, starting in 2011 and continuing throughout his turbulent relationship with the league. Nike didn’t release him from sponsorship in order to avoid negative publicity, but when they neglected to use him in advertisements, Kaepernick's lawyers claimed that the company wasn’t living up to its contractual obligations.

The Outcome of Nike’s Marketing Decision

Market Strategies International asked consumers about their reaction to the campaign giving them the option to pick positive, neutral, or negative, 38% percent of which chose the latter.

While this initially looks like a poor outcome for Nike, the study mentions a key point — whether Nike should be concerned about those who disagree with the decision: “The answer: Probably not. And as for the 38% with negative sentiment, well a good portion of that doesn’t translate into action. Only one in five said that they anticipated that they would boycott Nike products, and just 4% said that they would destroy the Nike products that they own.”

The same study concluded that the amount of awareness that this ad brought Nike was mostly positive. Within 24 hours of Kaepernick sharing the photo on Twitter, marketers at Apex Marketing Group estimate that Nike gained $43 million worth of media exposure, $19.01 million towards positive portrayal. Just a few days after that, the company estimated the campaign’s media exposure grew to $163 million.

Because of this immense amount of coverage, Nike earned a lot of awareness. Within 48 hours, two thirds of Americans were able to correctly guess that the ad belonged to Nike. Additionally, shortly after the ad Nike’s stock was at an all time high of $85.

Shortly after the ad came out, Wattpad launched a survey to our internal youth panel and asked them to name a brand they think is making a positive difference in the world (open-ended). 12% of all respondents named Nike; clearly, this generation isn’t afraid of brands taking a stance on polarizing issues.

It’s worth noting that Nike is no stranger to courting controversy (see their Tiger Woods commercial responding to his scandal in 2010), and that their products have caused deaths in the socially disenfranchised communities that Kaepernick is supporting (see the 1990 Sports Illustrated story, “Your Sneakers or Your Life,” and more recently a 15-year-old was shot while trying to buy a pair of Nike Yeezys).

And yet, Nike putting Kaepernick in their ad has turned their contractual obligation to a controversial athlete into a media-fueled ad campaign. Whether it’s cutting the swoops off socks, calling out Nike’s seemingly conflicting morals, appreciating the symbolic effort, or simply recognizing the image, Nike has undeniably made people care. Nike’s use of Kaepernick has ultimately made a positive impact for the company, whether they support his message with their actions or not.

The power of amplifying voices of the underrepresented means that people take notice. If Kaepernick's ad gets people talking about the issue of police brutality in America, it might just do some good — and Nike serves as a catalyst for what Kaepernick wanted to do in the first place.

If you liked this article, learn more about how Gen Z’s worldviews differ from the generations prior.