Gen Z Doesn’t Want Your Marketing. They Want Your Support and Partnership.

Why Gen Z isn't clicking on your Ad: Advertising messages targeting Gen Z must be useful, honest, and well-placed.

As many brands have learned the hard way, Gen Z has developed the most refined BS detectors in the world. Having grown up through the recession of ‘08, incredibly nuanced digital advertising, and endless sensational stories, scandals, and stunts in the press—they’ve seen it all.

Gen Z knows that life isn’t perfect, and they don’t expect it to be. Brands hawking their wares through the rose-tinted Instagram filter of lavish influencer lifestyles don’t always mesh with their reality. Gen Z wants to see a different type of advertising message — one that doesn’t involve keeping up with the Kardashians.

This pragmatism also means that Gen Z remains loyal not to a brand’s image, but to brands who are most useful and real to them. While Gen Z can be brutally honest in calling out brands who aren’t real, they also appreciate a well-placed, useful promotion that suits their needs. 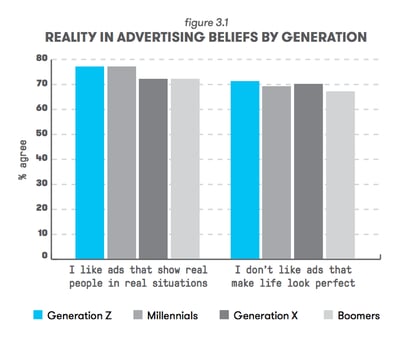 Gen Z is a passionate, self-starting cohort that’s not afraid to think outside the box as far as income and creativity are concerned. Gallup’s survey showed the depth in entrepreneurial passions. Nearly 8 in 10 students (77%) in grades 5 through 12 say they want to be their own boss, and 45% say they plan to start their own business. 42% say they will invent something that changes the world. The younger half of these students are now the ones that make up Gen Z. Want to be the brand of choice for Gen Z? Appeal to their practical aspirations.

Propel these young adults forward with their creations and assist them in their ventures and they’ll be fans for life. Got a software as a service? Offer student or under-25 price break. In the CPG space? Focus your positioning on benefits that will actually, well, benefit Gen Z.

There’s no more valuable currency to a Wattpad writer than an extra opportunity to share their words with engaged readers—getting paid to do what you love is, of course, a close second. That’s why, when Warner Brothers asked us to help promote Girl on the Train on Wattpad, we partnered with some of our top writers on a single piece of original content, inspired by the movie. Giving writers the creative agency to do their thing on a bigger stage was a dream come true for them—and the campaign was a runaway success with 1.9 million total minutes spent reading the original story Off the Track.

Sponsorships can go far beyond impressions. Your marketing organization has finances and alliances that you can lend out to Gen Z creators. Don’t spend time trying to craft a message the old fashioned way — audit your team’s assets. Ask yourself: what do I have to offer that will be useful to Gen Z? and they will repay you with their loyalty, social advocacy, and publicity.

Find a brand identity that resonates.

We’ve recently seen brands remove their logos or the wordmarks from their logos to try to appeal to younger consumers. Last month, Doritos launched a new campaign that temporarily removed its logo from its ads and social media content with the hopes of attracting Gen Z, who are increasingly bombarded with ad messages. The campaign’s video clip is devoid of the word Doritos, and instead relies on heavy suggestions to make viewers understand what's being advertised. This piece of disruptive “anti-marketing” is definitely a risky move, but as Creative Bloq reports, the video ad bombards viewers with triangular shapes and the claim that Doritos is so iconic "we don't need to name it". On a related note, as The Drum reported earlier this year, Mastercard removed its name from its intersecting circles logo for the first time since its 1968 creation in an act of digital simplicity. These brands may be onto something. Will others follow suit?

Although we’re unlikely to see multiple brands ditch their logos altogether, brands may aim to simplify them with hopes of resonating with a Gen Z audience. However, Business Insider recently reported that new research suggests that many minimalist logos aren't as effective because they don't indicate what the company does. Which begs the question—how will Gen Z really feel about your brand’s identity? You can always start by asking them.

Want to learn how Generation Wattpad, our Gen Z youth panel, is helping us understand Gen Z like never before? Contact us at brandpartnerships@wattpad.com.