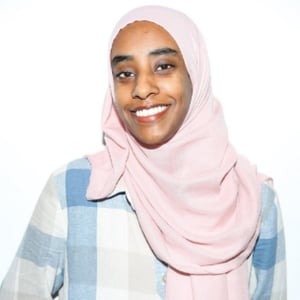 We sat down with local Torontonian, Sarah Hagi, who weighed in on diversity in storytelling. Take a look at what she had to say.

Diversity. In recent years, it’s grown from a talking point to an all-out rallying cry. Movements like #OscarsSoWhite and #TimesUp have forced the entertainment and media world to reconsider how the stories told up til now have failed to mirror the faces, lives and experiences of audience members around the world.

As the engine behind the world’s most diverse storytelling platform, and a barrier-free outlet for self-expression on topics like LGBTQ+ identity, acceptance and body positivity (in over 50 languages), Wattpad sees first-hand the magic that happens when diverse storytelling flourishes.

But if you’re a brand or media company trying to elevate new voices and stories, it can be hard to know where to start. As a freelance writer who also happens to be a black Muslim woman, Sarah Hagi knows all too well how many gaps exist when discovering diverse narratives. We sat down with her to talk about some of the major factors she sees in how we brands and media companies can not only find new storytellers—but elevate them, too.

Don’t just ask us to write about diversity

Over the last five years of my professional writing career, I’ve developed a type of sixth sense that tells me just how much experience brands, editors and media companies have when it comes to working with people of colour and other minorities. Here’s an example. My work has spanned humour, cultural critique and investigative reporting. Yet still, many organizations only contact me to write about my own identity. While on some level I appreciate the opportunity to speak to my experiences, I also want to see writers of color and women assigned work that goes beyond quota-filling work. When I’m only asked to write about diversity, it becomes obvious to me that for many of these organizations, it’s a last ditch effort to find a minority. If you only believe in diversity inasmuch as it means contacting marginalized writers to only write about marginalized experiences, you need to rethink whose voice gets to tell the rest of the stories.

It’s not about filling a quota

There are plenty of ways to connect with writers from diverse backgrounds, and that’s by treating them like the actual writers they are and not a way to fill a quota or checklist. That means constantly being on the lookout for more talent, and truly investing time into finding the type of writer who’d be right for your project.

As a person of colour who writes, I appreciate that my voice is welcomed and championed by different publications—but it’s also important to me that I’m not the only person of color in any given space. Just like it feels awkward to be the only person who looks like me in a room, it’s intimidating to be one of few non-white voices featured on a platform. Sometimes, it even acts as a major red flag — if a space isn’t used to publishing non-white writers, how do I know they’ll respect and honor my voice and perspective? In other words, you have to walk the talk. It’s important to show that the work is being done to level the playing field, and not treat writers of color as a box on your checklist.

I appreciate when media companies and brands reach out to me about projects that fit with the topics and ideas I care about. In my experience, one of the best resources for finding great storytellers is Twitter. Most of my work is commissioned through people who find me using the social network, and with resources like the account Writers of Color, which works as a direct link between thousands of writers and editors, sometimes all it takes is one tweet to get connected.

People of colour who write are also taking matters into their own hands and no longer waiting for the gatekeepers of publishing to give them chances. WeNeedDiverseBooks was created as an organization out of frustration at the lack of opportunities for ethnic minorities in traditional publishing.  It began as a hashtag by two young adult authors (Ellen Oh and Melinda Lo) after attending a white literary conference that was populated mostly by white writers and publishers. That hashtag started a movement, which eventually became a non-profit then turned their frustration into a non-profit which works tirelessly to amplify diverse writers and create actionable changes in the publishing industry.

While prioritizing finding diverse writers is the right thing to do and an easy way to begin creating a levelled playing field, it also works to any publication’s benefit. In 2014 while taking a look at electronic book sales Pew Research found those most likely to actually read books are college educated black women. It can’t be more clear that audiences are hungry for different perspectives.

Diversity in all forms of content, from blog posts to journalism to literature benefits everyone, and with ample resources for both writers and editors to connect, it’s easier than ever to find fresh new voices. So, what are you waiting for?